From Israel In Prophecy

KeyIssues: Is the destruction of Israel at hand? 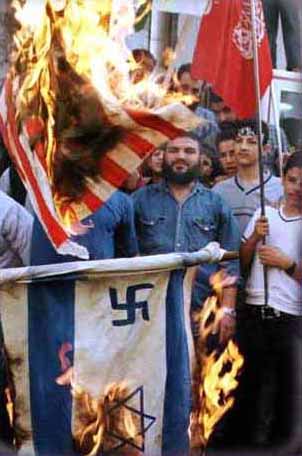 Here are some Bible passages that provide an answer for this question:

Here are some Bible passages that provide an answer for this question:

"I am the LORD, that is My name; I will not give My glory to another, Nor My praise to graven images.

"Also I will restore the captivity of My people Israel, And they will rebuild the ruined cities and live in them; They will also plant vineyards and drink their wine, And make gardens and eat their fruit.
15 "I will also plant them on their land, And they will not again be rooted out from their land Which I have given them," Says the LORD your God.

"He shall build a house for My name, and I will establish the throne of his kingdom forever.
14 "I will be a father to him and he will be a son to Me; when he commits iniquity, I will correct him with the rod of men and the strokes of the sons of men,
15 but My lovingkindness shall not depart from him, as I took it away from Saul, whom I removed from before you.
16 "Your house and your kingdom shall endure before Me forever; your throne shall be established forever."

17 "At that time they will call Jerusalem 'The Throne of the LORD,' and all the nations will be gathered to it, to Jerusalem, for the name of the LORD;

"For thus says the LORD, 'David shall never lack a man to sit on the throne of the house of Israel;

There will be no end to the increase of His government or of peace, On the throne of David and over his kingdom, To establish it and to uphold it with justice and righteousness From then on and forevermore. The zeal of the LORD of hosts will accomplish this.

31 "And behold, you will conceive in your womb and bear a son, and you shall name Him Jesus.
32 "He will be great and will be called the Son of the Most High; and the Lord God will give Him the throne of His father David;
33 and He will reign over the house of Jacob forever, and His kingdom will have no end."

In the last days the mountain of the LORD's temple will be established as chief among the mountains; it will be raised above the hills, and peoples will stream to it.
2 Many nations will come and say, "Come, let us go up to the mountain of the LORD, to the house of the God of Jacob. He will teach us his ways, so that we may walk in his paths." The law will go out from Zion, the word of the LORD from Jerusalem.
3 He will judge between many peoples and will settle disputes for strong nations far and wide. They will beat their swords into plowshares and their spears into pruning hooks. Nation will not take up sword against nation, nor will they train for war anymore.
4 Every man will sit under his own vine and under his own fig tree, and no one will make them afraid, for the LORD Almighty has spoken.
5 All the nations may walk in the name of their gods; we will walk in the name of the LORD our God for ever and ever.

Then the sovereignty, the dominion and the greatness of all the kingdoms under the whole heaven will be given to the people of the saints of the Highest One; His kingdom will be an everlasting kingdom, and all the dominions will serve and obey Him.'

15 Then the seventh angel sounded; and there were loud voices in heaven, saying, "The kingdom of the world has become the kingdom of our Lord and of His Christ; and He will reign forever and ever."

May it never be! Rather, let God be found true, though every man be found a liar, as it is written, "THAT YOU MAY BE JUSTIFIED IN YOUR WORDS, AND PREVAIL WHEN YOU ARE JUDGED." [While the context here is not the existence of Israel, this principle applies to any contradiction to God's prophetic word.]
In-Depth site topic IV- especially the Introduction: God acts for the sake of His name.

If you still don't agree, please read this.

If you have comments, please add them below.

At last! Someone with real eepxrtsie gives us the answer. Thanks!

Until I found this I tohghut I'd have to spend the day inside.

Retrieved from http://www.israelinprophecy.org/wiki/pmwiki.php/KeyIssues/13
Page last modified on April 13, 2013, at 04:48 AM